Why I Wrote the Grand Masters' Galaxy #SciFi Fantasy & Romance

The concept for the first book entered my imagination thirty years ago, although Grand Master's Pawn was only completed and published in 2015. Being frugal, my initial idea was to combine several short stories into a full-length novel. The organizing theme was a young woman, the Pawn, who travels on missions to different planets under the orders of a mysterious Grand Master. Following the chess analogy, the Pawn, Violet, is “Alice Through the Looking Glass”. Two of my short stories and skimpy notes about a dragon morphed into three of Violet’s missions.

The main characters were fuzzy until the Summer of 2014. After publishing my first full-length science fiction romance novel “The Lady is Blue”, I joined the Science Fiction Romance Brigade. At their Nebula Nights party, the character of the Grand Master crystallized in my mind, and the whole arc of the story fell into place.

There are hints of some of my favorite authors in this book: Andre Norton, Anne McCaffrey, and Philip Jose Farmer. The White Mother in the book shares aspects of both Miss Marple and Yoda. Violet’s Grand Master sounds like Darth Vader. Yet, characters acquire a life of their own, my story is a mystery, and “appearances can deceive” as one person says near the end of the book. The Grand Master’s griffin avatar may have been influenced by my visit to Bletchley Park, UK, in May 2014. The main entrance to the mansion is flanked by two stone griffins.

When I started writing in earnest, the story expanded into a trilogy with the scenes at the beginning and end of each book etched in my mind. The complex world of Grand Master's Pawn, Book 1, describes visits to eight planets and five or six alien races, such as the Brululians with rotating eyestalks, and the dragons. You can find brief descriptions of the planets in the Grand Master’s Trilogy: HERE

There are twelve Grand Masters, humans and aliens with immense psychic powers. Some are good, some are evil. The twelve Grand Masters are described in my Blog Post. Initially, Violet sees only the stone griffin, the emblem of the Grand Master who selected her. She cannot tell if the mind behind it, is good or evil, alien or human or an AI. As an empath, her best chance to probe the Grand Master’s mind is a face-to-face meeting. But, he knows a Grand Master’s unshielded psychic radiations are lethal to normal folk and cannot risk meeting her. Luckily for both of them, when she is exposed by accident, she finds his psychic emissions attractive rather than harmful.

In Book 1, Violet learns that her father was murdered after he prophesied doom for the Council of twelve Grand Masters. One or more of the Grand Masters is also implicated in the problems with the interplanetary teleportal system. These conflicts drive the plot in the first three books.

In Grand Master's Game, Book 2, Grand Master Athanor Griffin has a plan to flush his enemy, the Red Queen, out of hiding. We meet many of the characters from Book 1, and some new ones, including the remaining Grand Masters. His plan finally succeeds in Grand Master’s Mate, Book 3, when he and Violet trap the conspirators responsible for the blocked portals and the murder of Violet’s father.

The first three books were published in 2015. After publishing the Grand Master’s Trilogy, I wrote a short prequel about Athanor’s life before the events of Grand Master’s Pawn. Published in 2016, Grand Master’s Cat stars a feisty kitten, based on my first pet cat, a friendly and adventurous animal. The following year, I had the idea for a second trilogy starring the same main characters. At the beginning of Cosmic Rift, Book 4, Violet discovers Athanor has disappeared. She must search for him while caring for their baby son and cajoling the Grand Masters to halt the growing problem of Ixioth slave traders. Book 5, Cosmic Wars, continues their quest to destroy the slavers and rescue the child slaves from the universe beyond the cosmic rift. The problems with the rift and slavers will be resolved in the third book of the Cosmic Trilogy. 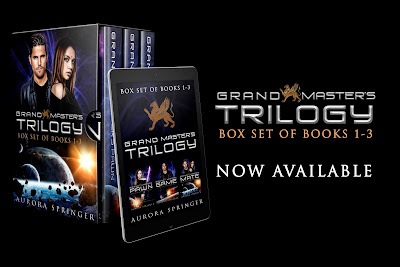