New Release - Lured by the Lion

Space opera and second chance romance with a grieving hero and space pirates. 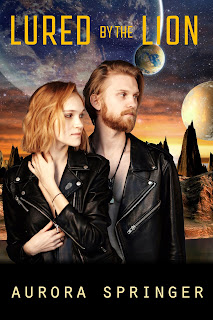 After the death of her ailing father, Jocelyn Navarre Yazzie is free to roam the galaxy in the Star Condor, the spacecraft she inherited from her deceased husband. She embarks on a trip to deliver her father’s bequest to her aunt on a rural planet outside the civilized sectors. A chance encounter with the crippled Leonardo Horlis changes her future. Leo Horlis suffers from a debilitating malady and expects to live for less than a year. Josie is strongly attracted to him, yet she cannot hope to compete with his beautiful dead wife, whose portrait dominates his house and his memories. Sympathizing with his grief and illness, Josie offers to transport him in Star Condor to the top medical center of the ultracivilized inner planets. Their attraction intensifies in the cramped quarters of her ship. But, Leo has a dangerous secret that threatens to terminate their voyage and their lives. Can Josie and Leo escape the perils and vanquish the ghosts of their past to find happiness together?

The stories in this series can be read in any order.

Lured by the Lion is available at Aurora's Store

and at Amazon  iBooks  B&N  Kobo  GooglePlay  Other  PRINT

Excerpt from Chapter One

Jocelyn Navarre Yazzie gazed with pride at the sleek spacecraft parked outside the maintenance hangar on the spaceport of Eagles Landing. She had inherited Star Condor from her husband, Jim. The ship held many memories, happy and bitter memories of her married life. They had flown between the stars as interplanetary couriers, delivering valuable packages and sometimes people. The Condor had been their home in the years before Jim had died. Her grief had faded during the subsequent period, three years and seven months in galactic standard time. She had ceased to count the days, although nightmares still troubled her sleep. Tears blurred her visions as she recalled the horror of his death in that dreadful accident.

Shaking off the surge of emotions, she blinked away the tears and looked around. A crane lifted a crate out of a spacetug, while another tug roared skyward, presumably to meet a freighter in geostationary orbit above the city. Beyond the airfield, heat shimmered over the orange sands of the desert. In the opposite direction, a line of passengers hurried onto a shuttle headed for an outbound space cruiser. Behind the shuttle, the red adobe houses of the city of Eagles Landing rose in tiers against a backdrop of wooded hills.

A hot breeze whipped past, sending whirls of sand skittering across the concrete. Fanning her face to cool her cheeks, Josie hoped her next destination would have a cooler climate. She had spent one and a half years on the planet of Saffeen, while she tended to her father during his final illness.

A door clanged shut as Butch Sullivan stepped out of the workshop of the hangar. He walked across to stand beside her.

Looking at the Star Condor, he said, “She looks good.” A typical understatement from the gruff old man who loved the ship. Butch served as engineer and odd-jobs man on the Condor’s small crew. His broken nose and scarred temple attested to a long and varied career. He had remained with her after Jim’s death. His dark hair was now grizzled and he had developed a slight paunch, yet she could still rely on his muscular strength and sensible advice.

“Yep.” Her mild reply covered her distracted thoughts. She teetered at a crossroads in her life, recovering from yet another family death and a long debate over what to do or where to go next. Her responsibilities for her father’s estate were almost at an end. She could remain on her home world with its many civilized comforts or she could resume her ventures in space. The sight of her ship, Star Condor, spurred a burning desire to abandon the planet for the freedom of plying the star routes.

The roar of a spacecraft descending onto the adjacent field penetrated her reverie. The once-bustling spaceport at Eagles Landing had grown quieter after the local economy had gone into a nosedive. The emperor’s space fleet had blocked the major hyperspace routes to the inner systems and throttled trade for independent planets like Saffeen. Jim had not lived long enough to experience the slowdown. Nor had her father.

After Jim’s death, she had worked the star lanes for a couple of years until she learned of her father’s illness. She felt obliged to return to the family home. Lucius Navarre was not the easiest man to live with, however, she was the only relative with the freedom to manage his medical needs and run the household during his final months. His death had come as a relief after the agonizing decline in his mental and physical health.

Her sister, Annabelle, had come to the funeral with her husband, Doctor Fengal Sharma, and their six-month-old son, Lucian. As the sole surviving children, Josie and Annabelle, inherited the major part of their father’s estate. Josie had splurged a large portion of her credits on Star Condor. She had upgraded the ship’s drive and renovated the life support and com systems. Reliable sources of power, oxygen and water were essential for interstellar space travel. Despite the quandary about her future, she had refurbished the cabins and galley. Even if she decided to forgo the star lanes and settle in her father’s mansion, the upgrades would bring a better price for the ship.

“Will we be making a long voyage, Captain Josie?” Butch asked.

His polite reference to her status made her smile. “We’ll fly to the planet of Wick’s Paradise. I promised to deliver an old vase to Aunt Gabrielle. It’s one of my dad’s weird bequests. And, my aunt’s invited me to stay for a week or two.” She shrugged. “After that, I’m not sure. Maybe Hokkaido. My sister’s always begging me to visit her.”

“Don’t matter where we go. Just want to order sufficient provisions for the trip.”

She nodded. “Why don’t you estimate supplies for three or four months. That’ll cover a stay on Wick’s Paradise and we can travel to another couple of planets.”

“Will do.” He waved a hand at the ship. “She’ll be a pleasure to run with the new systems. But, we’ll need another hand.”

The Star Condor, a small craft with simple controls, could be run by a single person in a pinch. Only one such emergency had occurred during Josie’s time on the ship. A single person could manage for a short trip, but three people working shifts allowed everyone enough time for sleep. Operating with alert crew on the bridge was critical for safety on a long voyage.

“No problem,” she said. “We can hire a second man. Do you have any suggestions?”

“Matter of fact, I do know of a prospect.” He cocked his head. “Remember Drin? Drin Nega. Guy worked on the Condor for a couple of seasons when Jim was alive.”

“Yep. Drin was good with coms and navigation.” She wrinkled her forehead. “Does he need a new job?”

“He’s looking for one. Had a bad stint on a cargo ship, disliked the captain. Guy’s not bad. Just happy to horsewhip sense into his crew, if you know what I mean.”

“I sure do. Jim hated those punch-happy bosses.” She frowned at the memory. “See if Drin is willing to join us.”

“Will do.” He glanced across the tarmac at the cargo shuttle. “When do you want to liftoff?”

“No reason to hang around.” She jerked her chin in the direction of the city. “It won’t take long to make my goodbyes. I’ll leave an agent in charge in charge of Dad’s property. And, I can throw my travel gear together in a jiffy. Let’s say seven days.”

“Okay, Captain Josie. I’ll jump to it.” Butch grinned and swung his hand to his ear in a mock salute.

Josie chuckled at his eager expression. “I’ll call Spaceport Traffic Control and schedule a slot for our departure. See you later.”

They separated on their different errands.

Email ThisBlogThis!Share to TwitterShare to FacebookShare to Pinterest
Labels: Lured by the Lion, Second Chances in Space