Epic SciFi / Fantasy Adventure and Romance - Three Volumes in One. 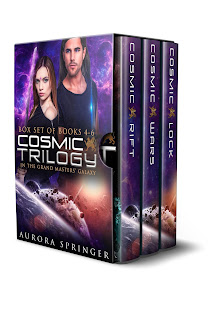 Join psychic superstars, Violet and Athanor Griffin, on an epic adventure into a parallel universe, meet aliens of all stripes, and of course, the fabulous dragons of Sythos.

Books 4-6 of the Grand Masters’ Galaxy

Empath Violet embarks on a desperate quest to find her missing lover.

Violet’s happy family life is shattered when Athanor Griffin vanishes. The Grand Master might have teleported anywhere in the galaxy. Violet strives to find her psychic partner, while looking after their baby and fulfilling his duties on the Council. She discovers a new threat to galactic civilization along with resurgence of the infamous Ixioth slavers. The Council dithers in response to her call for action, and even her former allies believe the Griffin is dead. She must risk her son, her psi-powers, and her life to rescue her beloved mate in the hope they can unite to fight the menace.

Teleport from planet to planet as the Griffins pursue their enemies across the galaxy and beyond.

Violet and Athanor Griffin reunite with their baby son after escaping from the world beyond the fiery Cosmic Rift, but they find no respite from troubles. The Grand Masters have declared Athanor dead, and are competing to replace him as Chair of the Counsel. Hordes of bloodsucking Ixioth slavers threaten galactic civilization, and a new enemy has emerged from the alternate universe, an enemy immune to psychic forces. The dynamic couple is soon swamped with pleas for help. Athanor’s vow to crush the insectoid Ixioths and expel the Nulls hits a major obstacle. Their enemies are using the teleportal web to strike and escape to unknown locations, somewhere in the galaxy. Violet has a different perilous challenge. Her promise to rescue the children captured on Cinerea means she must brave the dreadful Rift and lose her psychic powers. Can the Griffins reconcile their divergent promises, or must they separate for the tasks of rescuing the prisoners and defeating the slavers?

Three sets of enemies and a wormhole to shut?

Grand Masters Violet and Athanor Griffin return from beyond the Cosmic Rift with two shiploads of rescued children and escaped slaves, but their enemies have not been idle in their absence. Avalon is in flames and their baby son is missing. Finding him may be the easiest of their problems. They must unite the fractious Grand Masters, stop the bloodsucking Ixioths from enslaving sentients, and seal the cosmic rupture to prevent new incursions of the vindictive Nulls. The clock is ticking. They have twelve days to squash their enemies before their final venture into the alternate universe. Can they overcome the challenges and secure peace for the galaxy?