Anthology of four short stories and a novella. 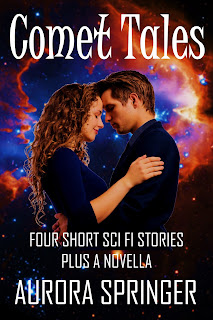 Trudge over the rocks of Mars, trek through a hazardous alien jungle, or pop across the galaxy in a pirate ship in five fun tales of adventure and romance.

Stranded on Illumina
Jacie’s plan to meet her boyfriend on the Planet Illumina is scuttled when he skips their date.

Lonely Hearts on Mars
Love blossoms from disaster in this science fiction short story set in the near future.

Captured by the Hawk
A Space Opera Novella. Spaceships crash across the galaxy in the comic misadventures of spy Grey Kat and pirate Black Hawk. Will Kat uncover his mask before they are imprisoned by the Emperor’s troops?